The current Medicaid continuous enrollment requirement enacted by the Families First Coronavirus Response Act (FFCRA) prohibits states from disenrolling individuals from Medicaid for the duration of the public health emergency (PHE) as a condition of accessing the enhanced federal Medicaid funding. The PHE is currently in effect through October 12, 2022, and is expected to be extended further, possibly to the end of 2022 or into 2023. When the PHE ends, state Medicaid agencies will redetermine eligibility for as many as 80 million enrollees. Many states are planning for this work to happen over a year, as allowed by federal guidance, amidst workforce constraints that will challenge customer service capacity and processing times. This will require states to include proactive communications strategies as part of their planning and to effectively reach targeted groups of enrollees at specified points in time, consistent with operational plans.

On March 3, 2022, the Centers for Medicare & Medicaid Services (CMS) released a State Health Official (SHO) letter, “Promoting Continuity of Coverage and Distributing Eligibility and Enrollment Workload in Medicaid, the Children’s Health Insurance Program (CHIP), and Basic Health Program (BHP) Upon Conclusion of the COVID-19 Public Health Emergency.” The guidance lays out expectations for states as they resume processing renewals for Medicaid eligibility and provides options and flexibilities for states to consider as they develop their operational plans to resume Medicaid redeterminations. In addition to notices, the guidance encourages states to leverage multiple modes of communication such as text messages, emails, and phone calls to reach enrollees with information about what they need to do to retain Medicaid coverage. CMS also urges states to develop a timeline for renewals that utilizes the necessary time to process all redeterminations to mitigate coverage loss. This means that states will need to be communicating in targeted ways with distinct enrollee groups as the renewal process begins and then repeats itself month after month until complete.

Despite the uncertain timing of when unwinding of continuous enrollment will end, states can begin to plan and communicate information now. It may take time to put in place new processes to reach enrollees directly, improve notices, and coordinate with customer service channels and stakeholders, including particular health plans and providers that will hear from consumers as this process unfolds.

This expert perspective focuses specifically on strengthening communications to enrollees once the federal PHE is lifted and the continuous enrollment requirement ends to ensure that those who are eligible maintain their coverage, and those who are ineligible are transitioned to a Marketplace plan or other insurance. The intention is to help states develop a timeline within their communications plans to coordinate and sequence outreach to these consumer groups. Critical in this effort to reduce churn will be effective coordination with stakeholders. This expert perspective outlines outreach strategies and tactics state Medicaid agencies and State-Based Marketplaces (SBMs) can implement to effectively inform enrollees what is happening and what actions they may need to take to stay insured.

CMS reiterated the United States Department of Health and Human Services’ (HHS) previous commitment to provide states with 60 days’ notice prior to the expiration of the PHE. The continuous coverage requirement will end at the end of the month during which the PHE is lifted. States then have 12 months to complete redeterminations for all enrollees. CMS guidance suggests states redetermine one-ninth of their enrollee population at a time, but states do have flexibility. Regardless of which groups of enrollees or how many are renewed at one time, the same tactics can be used for each individual renewal segment.

States will therefore have to target specific groups of individual enrollees based on the timing of renewals. For example, most states plan to take up to a full year to process redeterminations and return to routine operations.[1] Many will prioritize certain enrollees based on some hybrid of criteria, like those in an active course of treatment. Whatever the method, states will have to effectively message to those who are going to be renewed at the present time versus those who will be renewed later.

Therefore, direct-to-consumer messaging in mail, email, and text should be specific to those who need to act at different points in time, balancing the need to provide clear instructions to each renewal group as their redetermination window occurs without overwhelming customer service channels and confusing those enrollees who do not yet need to act.

We are living in a very crowded media environment today, with information coming at us across multiple channels, and often simultaneously—making it difficult to ensure that key messages break through and are retained. GMMB typically recommends that audiences be exposed to messaging 10 to 13 times across multiple channels to drive behavior. To maximize the effectiveness of outreach, planning and executing an integrated communications campaign that reaches enrollees with the same messages across multiple channels and with trusted messengers will be essential to ensuring that enrollees know what to do, when, and why as continuous coverage ends.

Consumer research also finds that enrollees expect to hear about their health insurance from health plans and providers in addition to Medicaid agencies and want to receive information in a variety of ways, including text and email. Consider reaching out to those partners as part of your planning efforts.  In addition, working with CHIP agencies and Marketplaces to ensure smooth coverage transitions for those no longer Medicaid eligible will be important, so engaging them in your efforts where possible is critical.

Enlisting key partners who can reinforce important information with enrollees will be critical to success.  Engaging partners and equipping them with operational updates and key messages can support your outreach and education efforts and ensure that accurate information reaches enrollees.  Communications strategies such as direct-to-enrollee messaging, earned, social and paid media are all important strategies to consider using in combination to effectively reinforce important information and drive renewals.

Coordination and Sequencing of Communications

Approaches and timing for sharing information about the renewal process in direct-to-enrollee communications will vary among states. Regardless of those specifics, certain recommendations apply as you strive to reach individuals multiple times.

At the beginning of the unwinding process, states may want to leverage multiple communications channels and enlist stakeholders to utilize earned media, social media, websites, and consumer help lines to get the word out as renewals begin. This reinforces messaging and helps to reach enrollees multiple times though a variety of touchpoints and trusted sources of information. Suggested strategies and tactics could include the following: 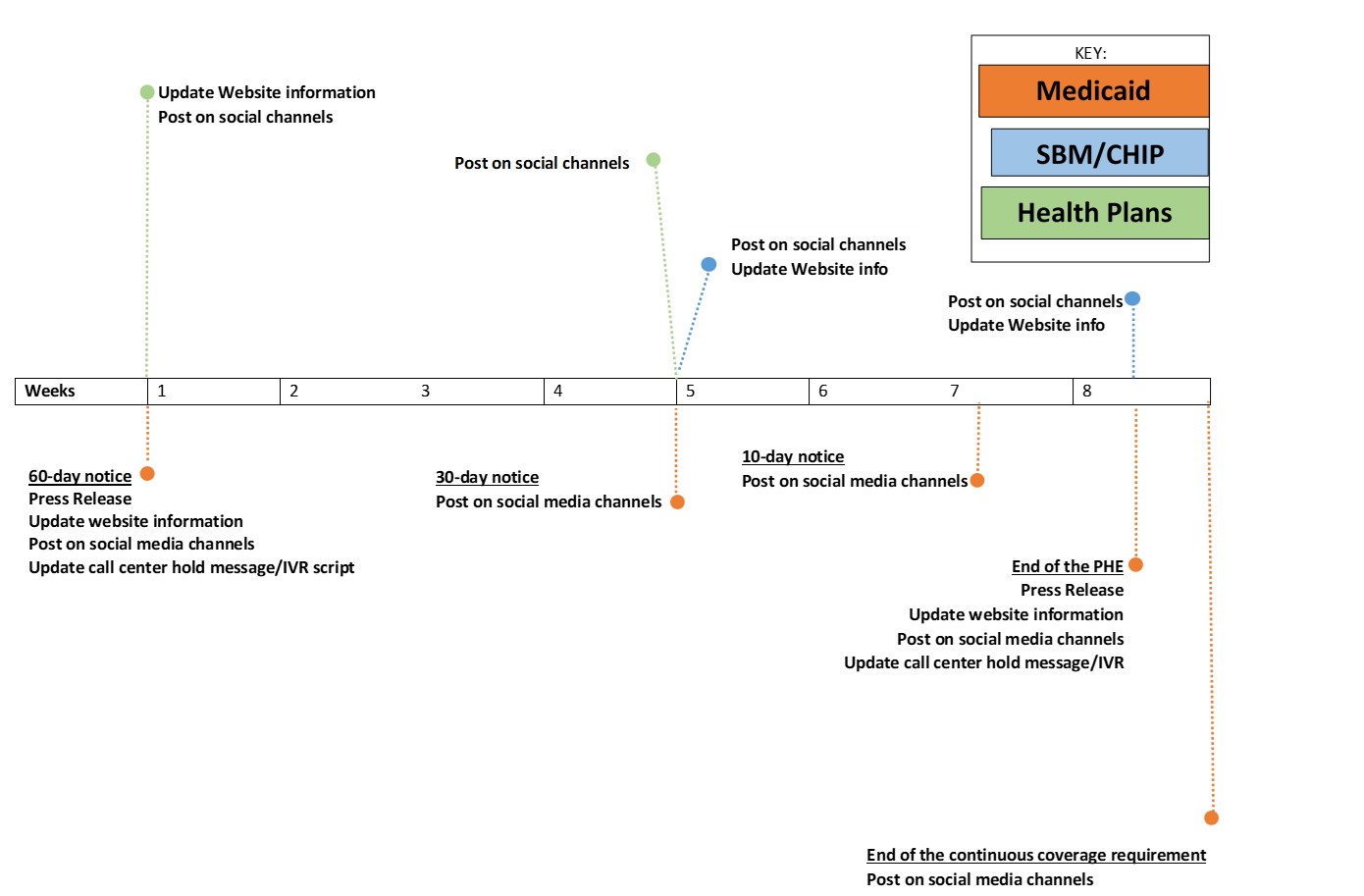 The communications strategies noted above allow for broad consumer awareness and provide surround sound while direct-to-enrollee communications can provide information specific to each individual, such as and what they need to do and when they need to act to renew their Medicaid health insurance. A sample cadence for direct-to-enrollee touches, including coordination between Medicaid agencies and key partners, could look like: 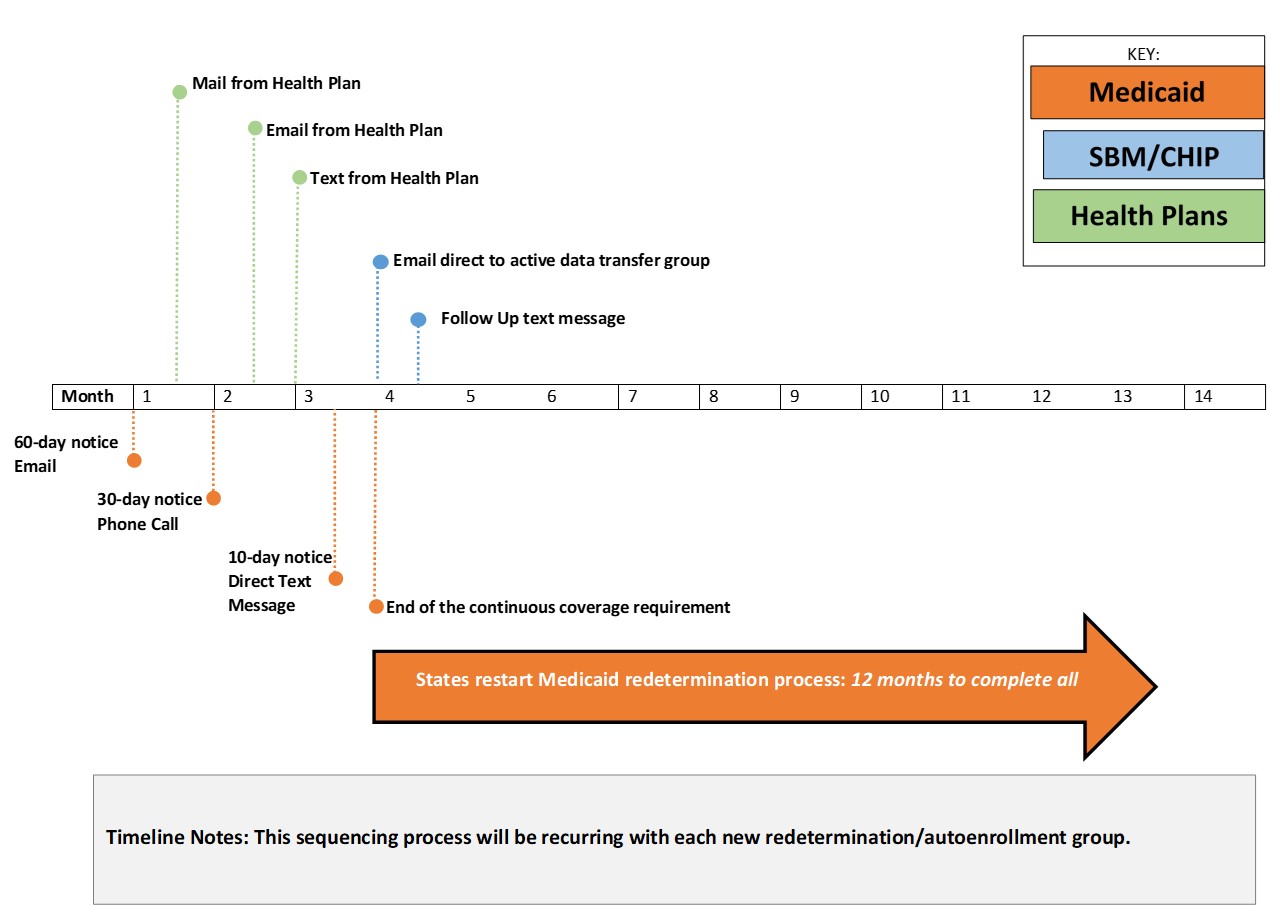 All direct-to-enrollee messaging should be short and simple. Use straightforward language to spell out:

The SHVS website includes a toolkit and message guides which contain sample language for enrollee communications which states can use and customize for their own purposes. Examples of state communications tactics are also housed there for additional reference.

The end of Medicaid continuous enrollment is a critical health coverage event. States will need to coordinate and sequence communications with clear messaging to inform enrollees about what is happening. Importantly, collaboration across Medicaid agencies, Marketplaces, and other stakeholders will be essential to preserving access to coverage and care for these individuals. Wrap-around communications to targeted groups at specific times will help to reduce churn and maximize coverage renewal, retention, and transition.