Communicating the PHE Unwinding: How States Are Conducting Outreach and Planning

At the end of the federal public health emergency (PHE), states will need to redetermine eligibility for nearly all Medicaid enrollees in the largest healthcare event since the Affordable Care Act. The volume of eligibility redeterminations is unprecedented, and there are significant equity implications—transitions between Medicaid and the Marketplace are likely to disproportionately impact people of color, as Black and Latino(a) individuals are significantly overrepresented in Medicaid and CHIP programs. Furthermore, people of color are more likely to experience volatility and instability in employment and housing as a result of long-standing, structural racism, which increases the chances that these individuals could lose coverage for administrative reasons at the end of the PHE.

In order to avoid these potential coverage losses, states will need to communicate with enrollees and other stakeholders about the actions they need to take to keep individuals enrolled in Medicaid or transition to another form of health coverage. To assist states in their efforts, State Health and Value Strategies’ one-stop page provides research insights and key messages states can customize and use in their own communications campaigns. One way that states are promoting transparency in their communications and planning efforts is through the public release of their unwinding operational plans. This expert perspective highlights several states that have made their unwinding operational plans publicly available as well as examples of states’ ongoing communication efforts, including outreach campaigns to Medicaid enrollees, strategies for collaborating with stakeholders, and collaborative initiatives within Marketplace states.

On March 3, the Centers for Medicare & Medicaid Services (CMS) released a State Health Official letter clarifying CMS expectations for state Medicaid and CHIP agencies as they prepare for the end of the Medicaid continuous coverage requirement. Per the guidance, states are expected to develop an “unwinding operational plan” that includes a description of how they will restore routine eligibility and enrollment actions in a way that minimizes erroneous loss of coverage. CMS encourages states to share their plans publicly and to consider other strategies to help eligible individuals maintain coverage, including by leveraging multiple modes of communication such as text messages, emails, and phone calls to reach enrollees with information about what they need to do to retain Medicaid coverage.

Several states have shared a summary of their operational plans with relevant stakeholders via publicly posted presentations. For example, Alabama Medicaid posted a presentation which summarizes their communications planning and unwinding plan for eligibility processes. The Colorado Department of Health Care Policy & Financing published a presentation from a webinar for community partners highlighting their operational goals for unwinding and their planned communication approach. In a presentation to their Medical Assistance Program Oversight Council, Connecticut similarly highlighted their operational goals for unwinding (including hiring new staff, training existing staff, and a planned approach to staggering renewals using primarily an age-based approach) as well as their planned outreach strategies. The District of Columbia shared information with their Medical Care Advisory Committee on their planned communication strategies for the unwinding process (procuring a vendor and developing a one-pager to share with stakeholders and enrollees). Hawaii dedicated part of a presentation to their Healthcare Advisory Committee (slides 20 through 30) to discussing their planned approach to member communications. Indiana and Kentucky both published presentations to their Medicaid Advisory Committees. Indiana’s presentation estimates the percentage of their total membership (25%) that remained enrolled solely due to the continuous coverage requirement and establishes a plan to process approximately one-twelfth of this group each month once the PHE ends. Kentucky’s presentation provides a snapshot of their current Medicaid population, the estimated total to lose eligibility, and the estimated share that may qualify for other coverage in addition to an overview of their plan.

Among other states that have publicly shared unwinding plans, Michigan used a presentation to inform stakeholders about the work they are doing to prepare for the end of the PHE, including a summary on Medicaid enrollment during the PHE as well as an illustrative timeline to highlight a phased approach to communicating with enrollees prior to and after the end of the PHE. The Michigan presentation also included an illustrative timeline of their proposed eligibility renewal plan at the end of the PHE, as well as a link to a stakeholder toolkit for communicating with enrollees about the upcoming changes. Montana dedicated part of a presentation (slides 43 through 61) to highlight their actions to prepare for the end of the PHE (for instance, they sent nearly 34,000 text messages between May and June of 2022 to encourage enrollees to update their contact information). New Hampshire also shared an update on their “Update Your Address” campaign, which contacted 112,319 enrollees by email and 23,155 enrollees by text messages. Pennsylvania posted a presentation on their outreach strategies, including how they are encouraging individuals to sign up as “PHE Helpers” to conduct outreach throughout the PHE. New Jersey, North Dakota, Oregon, and Virginia’s publicly posted presentations all highlight illustrative redetermination timelines. Virginia’s presentation, which was addressed to their Senate Finance and Appropriations Committee, also assigns roles to specific stakeholders during each phase of their community outreach plan. For example, health plans and Marketplace navigators will need to encourage members who lose coverage for administrative reason to complete necessary paperwork. Notably, Virginia’s plan outlines strategies for augmenting their staffing in preparation for unwinding, such as seeking funding to support payment of overtime for local agencies.

New York and North Carolina each posted a brief overview of their unwinding strategy, while Washington released an external guide that summarizes the key takeaways of their plan for resuming normal operating procedures at the end of the PHE, designed for use by navigators, brokers, providers, managed care organizations, tribal entities, and other stakeholders. Much like the presentations other states shared with stakeholders, this external guide outlines a phased approach to enrollee outreach along with images of sample communications.

Other states, including Arizona, California, Georgia, Kansas, Maine, Maryland, Michigan, Missouri, Nevada, Ohio, Oklahoma, Rhode Island, Tennessee, Texas, Utah, and Vermont, have publicly shared the official unwinding operational plans they developed per CMS guidance. Arizona posted their operational plan along with a summary for stakeholders, and both documents detail the specific flexibilities that are set to expire, those that have already been terminated, and those that will be extended beyond the end of the PHE. California similarly lists continuing and expiring flexibilities. Notably, each of these five states emphasize the importance of enrollee outreach and partnering with managed care plans and other stakeholders as they prepare to resume normal eligibility operations following the end of the PHE.

As emphasized in states’ unwinding plans, enrollee outreach is critical to ensure that those who are eligible maintain their coverage, and those who are ineligible are transitioned to a Marketplace plan or other insurance. State Health and Value Strategies recently published State Strategies for Sequencing Enrollee Communications When Medicaid Continuous Coverage Ends as well as recommended terms for use in direct-to-consumer communications, which can be found on the one-stop page of communications resources for states.

Many states—such as Arizona, Colorado, Georgia, Indiana, Iowa, Michigan, New Hampshire, New Jersey, New York, North Carolina, North Dakota, Oklahoma, Oregon, Pennsylvania, Rhode Island, South Carolina, Texas, Utah, Vermont, Virginia, Washington, and Wisconsin—have created webpages to inform enrollees about the upcoming return to normal renewal processes. Each of these pages feature answers to frequently asked questions about the PHE and what members need to do now, such as updating their contact information or keeping an eye out for mail notices. The New Hampshire Department of Health and Human Services also recently hosted a healthcare coverage renewal event for Medicaid enrollees to provide updated information and receive assistance completing their applications. Individuals attending the event received a free bag of groceries and representatives were on hand to assist with applying for other public benefit programs. Some states—including Arkansas and Louisiana—launched phone campaigns to encourage their Medicaid enrollees to update their contact information in preparation for resuming renewals. Others, such as Montana, Nevada, and South Carolina, issued press releases or newsletters to inform members about the end of the PHE. The Montana press release specifies that members whose coverage cannot be automatically renewed at the end of the PHE will receive a renewal packet as well as a follow-up text message encouraging them to complete the renewal package. State Health and Value Strategies published an expert perspective on the importance of text messaging as an outreach strategy, which includes template text messages.

States Are Collaborating with Stakeholders

In addition to leveraging multiple communications channels for enrollee outreach, many states have enlisted stakeholders to get the word out about the end of the PHE and to assist once renewals begin. The California Department of Health Care Services (DHCS) is leveraging managed care organizations, navigators/assisters, and providers to obtain updated consumer contact information and developed a toolkit for “Coverage Ambassadors.” Colorado, Missouri, North Carolina, Ohio, Virginia, and Wisconsin also developed unwinding toolkits and other outreach materials to provide community partners, stakeholders, and advocates with consistent messaging and resources to collectively support consumers with updating contact information, completing renewals, and transitioning to other coverage. Other states, including Montana and Nevada, issued notices to stakeholders encouraging them to spread the word and prepare Medicaid recipients for upcoming changes. The Alabama Medicaid Agency scheduled a COVID-19 public health emergency update for Medicaid providers and partners, during which Agency representatives will share how the Agency is preparing for the end of the PHE and the return to normal operations. Lastly, Massachusetts’ state legislature allocated $5 million for a community-based outreach and education campaign. Health Care for All will support the redetermination process by leveraging community-based organizations to conduct one-on-one outreach in communities that have the highest potential risk of coverage loss and to launch local ethnic and social media campaigns.

Another critical unwinding strategy for states will be to collaborate with Marketplaces to smooth the transition to coverage on the Marketplace for those enrollees that are no longer eligible for Medicaid. In February 2022, New York launched a campaign to encourage consumers to “stay connected” with NY State of Health, the state’s Marketplace, by signing up for text messages and encouraging people to update their contact information. The state is working on adding the capability to (1) send and receive texts in Spanish, and (2) text members who haven’t returned mail to offer customer service support. NY State of Health is leveraging relationships with health plans, local districts, and other stakeholders to inform state residents about renewing their coverage and exploring other available health insurance options if they no longer qualify for Medicaid, CHIP or the Essential Plan. California’s state-based marketplace, Covered California, delivered a presentation to their certified enrollers highlighting the marketplace’s close collaboration with DHCS on their PHE Operational Unwinding Plan. The marketplace also released a toolkit for enrollment partners and stakeholders with planning resources for the launch of auto-enrollment from Medi-Cal when the public health emergency ends. 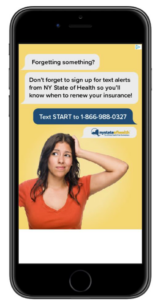 As states prepare for the end of the Medicaid continuous coverage requirement and plan for unwinding, there are critical steps they can take to promote transparency and keep enrollees updated on what is happening. In addition to publicly releasing their unwinding operational plans, states can create and publish a Medicaid enrollment and retention dashboard to inform key stakeholders, allowing them to understand exactly who is losing Medicaid coverage and for what reasons and modify or implement intervention strategies as needed. This expert perspective lays out a set of priority measures that states can incorporate over time into a data dashboard to track Medicaid enrollment following the end of the continuous coverage requirement, while a companion issue brief details the current status of Medicaid enrollment and retention data collection and best practices when developing a data dashboard. States should also leverage multiple communication channels and sequence their communications to enrollees. Collaboration across stakeholders as well as Marketplaces will also be essential to preserving continuity of coverage and care for individuals, whether through renewal or transition to another form of coverage.